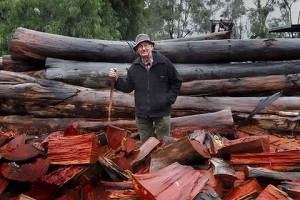 Sunday Age, 27 June 2010: On Tuesday, after a long and divisive battle, 150,000 hectares of new national park and reserve will be declared along the Murray in northern Victoria.

The Barmah State Forest, the southern section of Australia’s biggest red gum forest- described by some as the ”Kakadu of the south” – will become one of four new national parks and will be jointly managed by its Aboriginal traditional owners. At nearly 30,000 hectares it is a significant chunk to be protected, following a three-year investigation into the state of the red gum forests.

While Yorta Yorta leaders are optimistic about the new park and environmentalists are delighted by their campaign win, many locals around the forest remain bitter about the change, which they say will lock up the land they have lived in and used sustainably for generations.