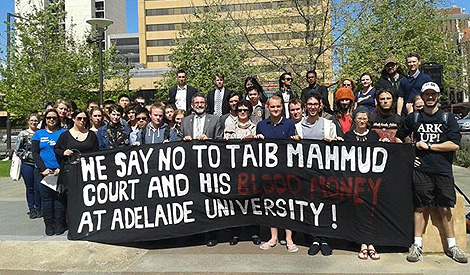 26 September 2013: A Malaysian MP has fuelled the controversy surrounding Adelaide University’s decision to name a plaza after an allegedly corrupt Malaysian political leader – and university donor – warning the university’s image could be “tarnished”.

Sarawak State Assembly member and chairman of the opposition People’s Justice Party Baru Bian said there were “compelling” reasons Adelaide University should consider calls made last week by protesting students for the university to revoke its naming of a plaza after Sarawak’s Chief Minister, Abdul Taib Mahmud.

Referring to longstanding reports of official Malaysian corruption investigations into Mr Mahmud, Mr Bian said: “If I were (Adelaide University officials) I wouldn’t want to be connected with that very damning reporting that could tarnish the image of the university.

“I think it would be a very bad precedent”.

Mr Mahmud, who despite earning a public servant’s salary is believed to be the richest man in Malaysia, has been accused of corruption by numerous sources, including the US State Department and the Swiss NGO Bruno Manser Fond.

Last Thursday a group of around 40 students took part in a protest calling for the university to cut ties with the controversial leader, a former student who has made substantial donations to the university.

Critics claim the Chief Minister has run Malaysia’s largest and most resource-rich state like a family business over the three decades he has held power, controlling Sarawak’s biggest companies and favouring them with state contracts.

A 2006 US diplomatic cable leaked by Wikileaks accused Mr Mahmud of “self-enrichment” and described Sarawak as “highly corrupt and firmly in the hands of its Chief Minister”.

“Taib and his relatives are widely thought to extract a percentage from most major commercial contracts—including those for logging—awarded in the state,” the cable read.

Mr Bian said the Sarawak government’s current project of building a string of giant hydroelectric dams to attract foreign investors was an excuse to take land from indigenous people and a means for authorities to profit corruptly.

A group of around 100 of 1500 mainly Penan people due to soon be moved to make way for the reservoir of the state’s newest dam are currently blockading the dam’s access road in protest over provisions for their resettlement which include support payments barely above the poverty line, which will be phased out after a few years.

Adelaide University’s Student Representative Council Ethnocultural Officer Yasmin Martin said, “We believe a significant amount of Taib Mahmud’s immense wealth has come from unsustainable and illegal deforestation in Sarawak and corruption, and that has had direct effects in dispossessing the Penan people”.

Ms Martin, who grew up in Malaysia, said the Chief Minister was a notorious figure in that country and that the use of his name was offensive to Malaysian students.

“Adelaide University has created some incredible graduates who have gone on to do really great things but our university chose to honour the one who had the biggest wallet, basically, who has done some pretty horrendous things with his power and his money,” Ms Martin said.

Earlier this year The Malaysian Anti-corruption Commission confirmed it had opened fresh investigations into Taib Mahmud’s business dealings following the release of a hidden camera video which showed close relatives and associates of the Chief Minister discussing the mechanisms for arranging illegal land deals.

The University of Adelaide has claimed it is bound to name the plaza owing to “permanent trust obligations and agreements”. A spokesperson did not respond to questions about the university’s donations policy.