‘This is my river’: what’s at stake in Baram dam dispute 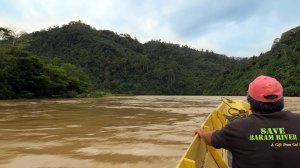 Crikey, 19 November: In Sarawak, in Malaysian Borneo, hundreds of tribal people are blockading big dam projects that threaten their land. Freelance writer Jenny Denton says Australian businesses with links to government are among the international companies helping to build them.

“Good fishing!” Johannes yells from the front of the longboat, where he’s sitting cross-legged in his “Save Baram River” T-shirt, surveying the expanse of brown water, which is high and fast and full of debris. The driver slaloms expertly around drifting logs and floors the outboard across currents and swirling eddies.

This is the mighty Baram, which starts as a stream in the highlands of Malaysian Borneo bordering the Indonesian territory of Kalimantan and winds 400 kilometres west through Sarawak to the South China Sea, taking in, along its torso and branching tributaries, the territory of hundreds of small native communities.

Here in the mid-to‑upper section of the river people live close to their jungle environment — hunting deer and wild boar and gathering edible ferns from the forest, as well as fishing, growing rice, fruit and rubber trees, and keeping chickens and pigs.

But the river’s size and power have made it a prime candidate for inclusion in Sarawak’s sweeping hydropower expansion plans. As Crikey reported last year, if the damming of the Baram goes ahead, thousands of indigenous people will be forced from their land.

The planned 185‑metre-high concrete dam would submerge 388 square kilometers of these river valleys, home to an estimated 20,000 Kayan, Kenyah and Penan people.

State energy company community relations officer for the project Ding Juh believes the dam will bring jobs and basic infrastructure to a region where both are badly needed. “I see it’s a way where the standard of living for the people can be uplifted,” he told Crikey. “Because I’ve lived [in the area] since I was born and I can see the hardship and how people are coming to the urban areas, to the city, to look for jobs.”

But at the community of Long Liam, where we pull into the bank and clamber up a muddy path to the longhouse, no one agrees with him.

“In this longhouse we don’t have any in favour of this dam. From the beginning we really hate this thing!” announces Kallang Jok, the deacon and assistant headman of the village, which is one of 32 that will end up underwater if the dam goes ahead.

Mujan Ngau, a bright-eyed old lady with tattooed feet and stretched earlobes, says she has visited the resettlement area where 10,000 people were moved to make way for the massive Bakun dam 15 years ago, and she has no faith in assurances things will be done differently this time.

The Baram dam is the most controversial of 10 new dams being investigated or developed in the state of Sarawak, which has surplus electricity for domestic demand but hopes to kick‑start the industrialisation of the economy by attracting energy‑intensive industries with cheap hydropower.

Three weeks ago 200 local people chased away workers and set up a blockade of the dam site, saying work had begun on the project, which has not yet been approved. Meanwhile, 10 people were arrested earlier this month at a blockade of the newly completed Murum dam, which has been running for two months. The Murum dam will displace 1400 mainly Penan people.

Critics claim the Sarawak Corridor of Renewable Energy (SCORE) initiative is being driven by the corruption and vested interests of Sarawak Chief Minister Taib Mahmud, whose family businesses control much of the economy and who is currently being investigated by Malaysia’s anti-corruption commission.

Across south‑east Asia regimes with poor governance and little accountability are working with foreign companies to build dozens of big hydroelectric dams. According to the NGO International Rivers, these projects will displace tens of thousands of people and threaten the food security of millions more.

Former Australian Greens leader Bob Brown, who has had a long involvement with Sarawak, told Crikey it was “immoral” that “a line-up” of international companies were seeking to profit from projects there “which sign the death warrant on the ancient lifestyles of the people and the future they want to hand on to their children”.

One such company is “Australia’s leading renewable energy business”, Hydro Tasmania, which Brown came into conflict with in the 1980s over its plans to dam the Franklin. The government-owned firm has reduced and played down its involvement in Sarawak since being targeted by campaigners but continues to do consulting and provide key staff for the development of dams.

Consulting firm SMEC, a former Australian government agency that trades on the reputation of the Snowy Mountains scheme, is reportedly playing a much bigger role, with around 200 staff working in Sarawak, where the company has contracts with Chinese dam-builder Sinohydro. SMEC’s New Zealand arm is involved in another controversial hydro project, the Don Sahong dam in Laos.

The last person to speak at Long Liam is Josep, a father of five with a worn face and worried eyes.

“We hope you will bring our voice to the outside world, voice our discontent, our disagreement with this dam project,” he says. “And we hope our views will be heard, and that the international community will do something to help us. Please understand the difficulties we are facing here. We love this land. This land is our land. This is God-given to us.”

SMEC declined to comment for this story. Hydro Tasmania has said it awaits the results of investigations by the Malaysian authorities into “allegations of corruption made around the hydropower project” and insists its staff “adhere to our values, code of ethics and commitment to sustainable development”.

« Indigenous workers expel workers, blockade another dam in Sarawak
‘God made this land for us, the devil has taken it’: Sarawak dams its people »

One thought on “‘This is my river’: what’s at stake in Baram dam dispute”