Posted by jennydenton ⋅ December 20, 2012 ⋅ Leave a comment
Filed Under  Northcote 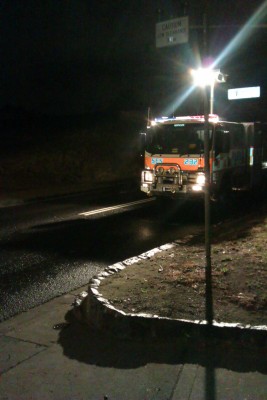 Westgarth Street-Merri Parade was closed for more than two hours between High St and Union St last night after a bough from a giant cypress broke off and fell across the road.

The State Emergency Service was called just after 10.00 p.m. and police blocked the road at High St as a crew of SES and VicRoads staff worked to clear the branch with chainsaws.

Lorraine, owner of the tree and the property where it’s growing, on the corner of Merri Parade and South Park Street, said the household was celebrating a birthday and didn’t notice the gusting winds.

“We heard this crackling, like fire. I thought, ‘Someone must have some fireworks or something’. Then we came to the door and saw the branch was splitting. It was amazing watching it peel.’”

She said the branch went down quickly.

“It was just lucky there were no cars.”

‘We probably had another 10 or 12 trees down across the entire state,’ Mr Quick said.

According to the Bureau of Meteorology, measured wind speeds in the northern metropolitan area were only 30 kilometres an hour with 40–50 kilometre an hour gusts.

But Cameron Henderson, from BOM, said rain could bring stronger winds and unpredictable gusts with it.

“We did have some rain last night, and if you get what we would call a downdraft, that can bring stronger winds down from aloft—higher in the atmosphere—so it’s possible we had a localised stronger gust associated with the rainfall.”

Northcote SES unit controller Chris Patton, who has been an SES volunteer in the area for 25 years, said the incident was predictable.

He said cypresses are “difficult” trees, which are prone to dropping large branches and need to be maintained.

Mr Patton said tree maintenance was comparable to dentistry, and ignoring the need for it due to the expense was a false economy.

“Gravity’s going to make them all come down eventually. It’s not if, but when.”

Mr Patton said it was not only tree owners’ houses but also the properties and cars of neighbours that were often damaged by falling trees and branches.

Lorraine, who was relieved the falling bough didn’t cause more damage, said she was fond of her cypress, which houses a small community of possums.