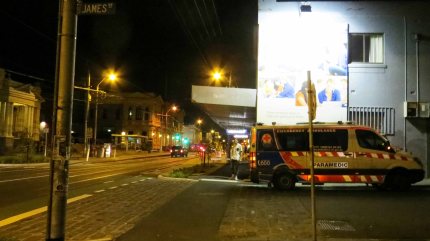 A man was knocked unconscious and suffered serious facial injuries and two others were stabbed with a syringe outside Northcote Town Hall on Saturday night in an attack police described as very unusual.

One detective unit and four marked police cars were called to the scene and the front of the Town Hall was cordoned off after the assault, which police estimate happened between 10.30 p.m. and 11.00 p.m.

Det Sen-Constable Mark Perna, from Whittlesea Crime Investigation Unit, said that after a man was punched to the ground two people who went to help him were stabbed in the neck with a syringe by the same attacker.

“The first male, who got knocked out, was friends with the attacker. The other two were just assorted people that had come to his aid and been stabbed as a result.”

Det Sen-Constable Perna said needle stabbings were very unusual and that there were concerns the syringe may have been “dirty”.

He said the reason for the initial assault was unknown.

The injured 28-year-old was taken to Royal Melbourne Hospital with fractures to his nose, jaw, cheek and eye socket.

A 25-year-old Eltham man, who was known to police, was arrested at the scene and has been charged over the attack.

He has been remanded on bail to appear in the Heidelberg Magistrate’s Court in March.